For some time, I worked as an experimental physicist in the Quantum Optics group at Leiden University, The Netherlands. I was always looking for ways to explain my research to non-scientists, because I don't think that happens nearly often enough.

This is an explanation of surface plasmons that has been evolving for quite a while, and I’ve used it in various publications and talks. The form of it you read here is adapted from what I eventually published in my dissertation. (It’s a little bit less formal.)

What is a surface plasmon?

You might know a book called Flatland by one Dr. Edwin Abbott Abbott. It’s a short allegorical tale (you can read it online and it doesn’t take very long) that satirizes the class society and the status of women in late 19th century England. Abbott wanted to make a better world with his book, but his efforts were mostly forgotten — society eventually changed, but the world was not ready for Flatland. Perhaps because all the characters were squares, triangles, lines, pentagons, and other polygons, living in a two-dimensional world. 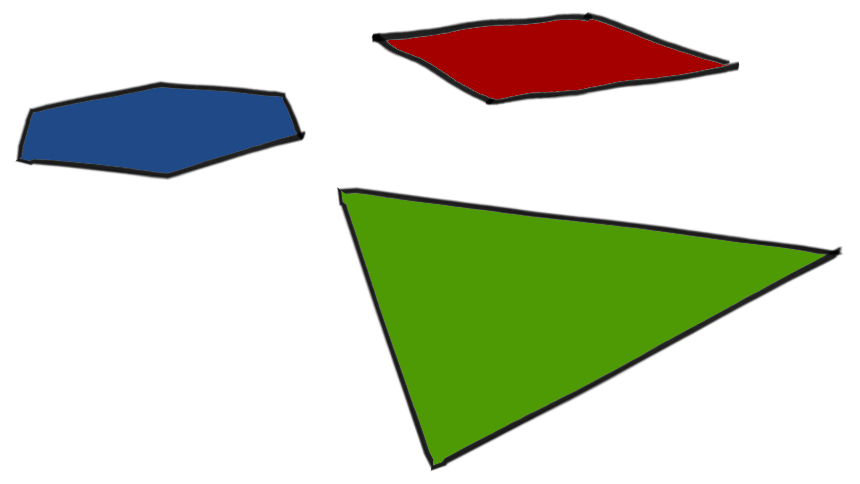 No matter how ridiculous, the idea of a two-dimensional world is just cool, and it appealed to mathematicians and other geeks of later generations. That is probably why Flatland is still read and not consigned to the dustbin of history.

Many devices and effects that are familiar from normal, three-dimensional optics also exist in Flatland, usually created by applying some sort of material or structure to the surface. For example, to illustrate that researchers are actually doing this, here are examples of mirrors and lenses: 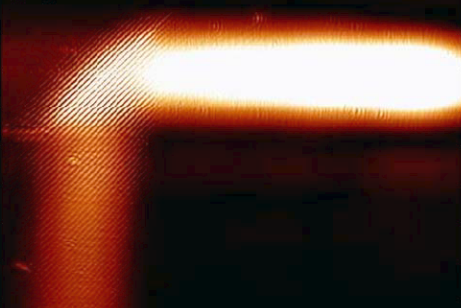 On the left, you see a Flatland mirror, from a 2006 paper by Maria-Ujue González et al. On the right is a Flatland lens, from a 2010 paper by Eloïse Devaux et al. (That paper is open access, so it’s free to download and read!)

Waves, but what kind?

Surface plasmons are special because they can only exist on the boundary surface between a metal that conducts electricity very well, like silver or gold, and a non-metal substance, such as glass, plastic, or air. (As always in science, there are exceptions to this rule: just recently a layer of graphene was proposed. Is there anything graphene can’t do?) The metal has to be a good conductor, so that some of the electrons belonging to its atoms, called free electrons, can move more or less unhindered through the metal, from atom to atom. Surface plasmons cannot exist without free electrons.

In an ocean wave, the water level rises and dips, but nothing like that happens in light waves in Flatland. In a surface plasmon, the wave is connected to back-and-forth movements of the free electrons in the metal. Moving electrons create a wave on the outside of the metal, and the wave moves other electrons inside the metal, which is how surface plasmons move.

Surface plasmons being trapped on the metal’s surface, or in the lingo, confined, is actually one of the desirable properties of surface plasmons, and partly explains why they are such a popular research subject. Transforming light into surface plasmons allows light to squeeze into tiny spaces, smaller than it would otherwise be able to fit into. The more you try to confine regular light, the more it tends to spread out, and if you try to cram light into a channel that is too small to contain it (less than half the light’s wavelength), then it simply won’t fit. (Although that is a simplification; I did some research showing otherwise.)

Surface plasmons, on the other hand, can be stuffed into tiny strip-shaped metal channels or grooves. Researchers can use them to develop ultra-small components for circuits that carry light instead of electricity: this is the field of nanophotonics. (Nano is a word meaning, roughly, smaller than one micron. It refers to the realm of objects the size of a cell membrane, a virus, or one one-thousandth of a human hair.) Even though surface plasmons were discovered over fifty years ago, nanotechnology has only caught up in the last ten to fifteen years and made nanophotonics possible.

Confining a surface plasmon into a small space squeezes all the energy it carries into a small space too — this effect is known as field enhancement. Researchers can then do processes that require a lot of energy without needing a lot of light, because all the light’s energy is concentrated in one tiny place. This is also important for antennas in nanophotonics. An antenna is nothing more than a device that converts free radiation (cell tower signals) into localized energy (the electronics in your mobile phone) and vice versa. We can engineer tiny metal antennas in such a way that they have a single spot where the field enhancement is very large. If we position a molecule at that spot, the molecule can broadcast its energy very efficiently through the antenna. So a good plasmonic antenna is an efficient bridge between molecule-sized phenomena and human-scale signals in the laboratory.

One problem with engineering photonic devices is that light is damped when it interacts with metals. The light’s energy is simply converted into heat. Obviously, that is a nuisance, but as is usual in science, someone has figured out a way to turn it into an advantage. Researchers are working on an experimental cancer treatment that works with tiny particles called “nanoshells” coated with a thin layer of metal. These nanoshells can be attached to antibodies that seek out cancerous tissue and congregate in the tumor cells. Infrared light normally passes harmlessly through body tissue; however, the nanoshells are engineered to act as receiver antennas for the light, absorbing it and concentrating all the energy in a small space. The resulting release of heat kills the cancer cells.

Where can I learn more?

For further reading, I recommend a 2007 Scientific American article about surface plasmons and their applications. Unfortunately, you have to pay for it. For a more technical review of the latest developments, there is an open-access article in Journal of Physics D, only a year old at the time of writing.